You know what that means? It's Latin. It means, 'Know Thyself.'

One of the most enjoyable things about writing is when a character knows themself so well and they have so much depth to them that it springs out of the page at you... (dialogue beats removed)

Namazu : “Nothing. It does not mean anything.”

Namazu : “I mean, ‘punk’ and ‘alternative’ are just marketing words to get people to buy and wear clothes that make them feel different or special when they are not. They want to pretend that they are rebellious without actually being a rebel. That makes them buy stuff from the corporations to help them feel that way, without realizing how funny that is.”

Raz : “How come you wear punk-style clothing then?”

Namazu : “That is different. I wear it just because it looks coolio, not because I believe it makes me special. If you pay attention, sometimes you notice that I do not wear punk stuff at all. Being a rebel is not about the clothes you wear. You are either a rebel or you are not; how you look makes no difference. A true rebel knows that.”

Raz : “Hmph, said the girl working for a corporation.”

Namazu : “Just because I take their money, it does not mean that I cannot work against them. That is what the word irony is for.”

Raz : “That’s really deep and complicated, coming from you.”

Namazu : “I am a deep and complicated person, it is just that you never listen to me enough to notice.”

I've neglected this blog over the last couple of months, mostly due to my concentrating solely on creating the audiobook for 2120. With the year 2020 on the way out though, things should start picking up again. Once the audiobook is out at the start of the new year, it will be full steam ahead on writing and finishing the first major book in the series, 2121.
This year may have been a horror show in all but name, but on a personal level things have gone in interesting and amazing ways that I never thought they would. I didn't plan on writing and releasing the prologue short novel, but it happened. I didn't plan on doing an audiobook for it, either. But due to the shorter length, the smaller number of characters needing voice actors, and the logistics of it all being easier, it all made sense.
There's only two characters left requiring their voices added to the audiobook, and then it will be up for pre-orders. I thought the original buzz of releasing my first ebook on Amazon Kindle was great, but audiobooks are taking off in such a big way that I've already had people asking about when 2120 releases. The interest compared to ebooks is phenomenal.
So far, I've yet to have anyone give me any really negative feedback on Solar Rift's characters, or 2120's story, or my writing for that matter. It will come, of that I'm sure. Being a laid back person, I'll take it all with good humour anyway. I think I might take a cue from Elon Musk - happily showing the world his rockets exploding, or Joe Abercrombie's twitter - revelling and posting the worst and most brutal reviews.
Either way, I'm excited for the new year. With the added exposure of the audiobook, the full-length novel coming out, and hopefully some more artwork and videos, 2021 should be the perfect year for 2121's release. Hopefully more folks will fall in love with Raz and Namazu, or root for Zarina and Dieter to make it through their next scrape.
Considering how wildly off-plan this year went for Solar Rift, I hesitate to make ANY predictions for any of it. All I know is that I -will- be releasing 2121. No. Matter. What... I'm not going to end up being George R.R Martin.
at December 14, 2020 No comments:

Back to the Novel

With everything to do with the prologue novella, 2120, all but done, I've returned to writing 2121 the full-length novel. There's still a few new things to get out there - like the "This is... Namazu" video that kicks off a series of main character introductions, as well as me attempting to turn 2120 into an audiobook. But, for the most part, my focus is once more back on the novel.
The old versions of Chapters 1 and 2 up here at the blog are looking a bit shabby compared to how they now look, so I might get around to updating them again soon, but that will depend upon my free time outside of writing.
As I said on my progress journal at the writing forums, considering everything I learned in getting 2120 out there, both literary and the technical aspects, it should stand me in good stead to make 2121 a much more polished product when it's finished. I feel the entire process has justified my decision to take the time out to create the prologue in the first place. When it eventually goes free to everyone when 2121 hits, it will also complement the full novel with more exposure and hopefully get more people enjoying the characters and story.
I felt relieved elation but tired when I completed 2120. Now I feel re-energized for 2121.
at September 05, 2020 No comments: 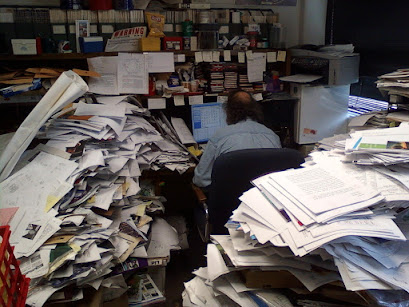 I think this pretty sums up my notes in scrivener right now. I get to flush a few of them out now that the prologue novella, 2120 is done and dusted. But it's basically like taking 2 sheets of paper away from this image above, heh.
at August 27, 2020 No comments:

I'm not one to usually toot my own horn, but I had to share this. It blew me away. 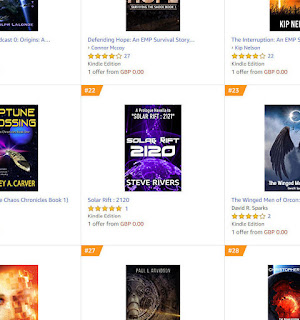 At its peak during its promotion weekends, Solar Rift : 2120 reached as high as #22 on the free book listings for cyberpunk scifi. I have no more words. Gobsmacked is an understatement. 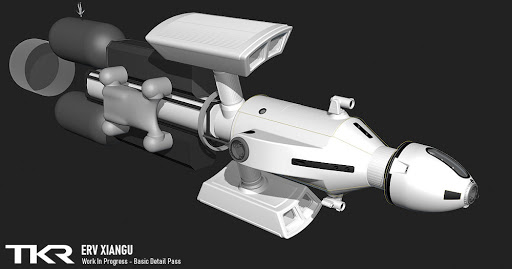 With the prologue novella, Solar Rift : 2120, launching this week, I've had to do a bit of housekeeping with the blog. The most notable item is that I've removed the preview of the first chapter that I put up here - "Raz."
Amazon (and everyone else's) publishing guidelines require me to remove it before publication, but if you use the free sample that they supply when the book goes live, you'll be able to preview even more than Raz and Namazu's first scene. So it's a win-win all round.
Everything relating to the main novel, 2121, and the first two preview chapters here remains the same. So, if you start with "Milan" in the link above, everything will still flow as it should. (Even if the version online here is quite an old one by now.)
The response by the beta readers to the prologue novella has been really astounding, and if paying readers find it half as good as they did when it goes live, I'll be delighted. 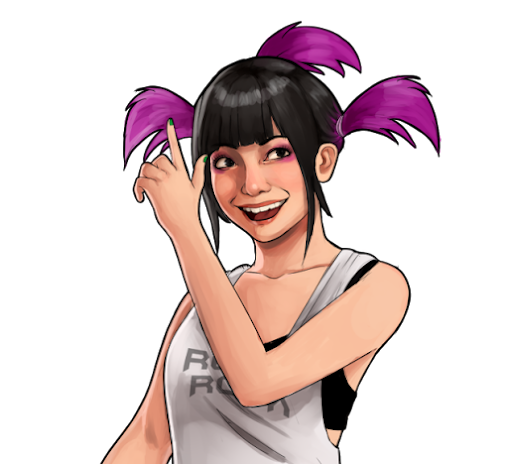 The Prologue Novella, 2120, is about to undergo its final couple of revisions when the last of the beta readers get back with their feedback.
Along with the character images of Raz, Namazu, and Zarina, and the schematics of the Xiangu, the artwork accompanying the book will include this rendering of Zarina's Fantastica sword, Sunblade. The engraving isn't as detailed or intricate as I'd like, but with the time available to me, I'm pretty pleased with the final result. 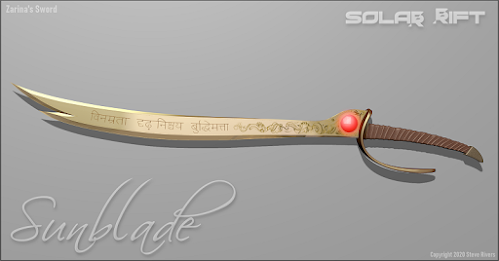 The book is looking like it will be out in time to take part in the Kindle Storyteller Award 2020 contest, and when it goes live it should be as close to what I envisaged when I came up with the idea.
at July 30, 2020 No comments: