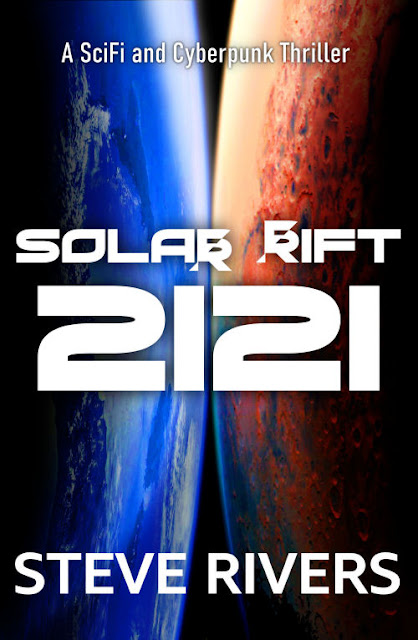 Updated 26/04/2020
Added nearly all of Chapter 2, with the exception of a couple of Zarina's scenes.

The Soldier, the Spy, the Colonist, and the Captain.

Four character-driven stories intermingle to bring dramatic viewpoints of a civilization-spanning tale set a century in the future. One part sci-fi adventure, one part cyberpunk espionage, one part frontier survival, and one part political thriller, Solar Rift brings these different elements together in an exciting clash of backgrounds and ideologies.

In the year 2121, a catastrophe on the largest moon of Mars sets off a chain of events that uncovers a bloody world of inter-corporate battles, national-corruption, and terrorist revolutionaries. All begin to crescendo, as technological progression forces Earth's old institutions and societal systems to finally reach breaking point.

On Phobos, Milan Kalakov, a Major in the Russian Space Force, has only recently arrived to serve aboard Domovoi Outpost. However, his first week ends with a horrific incident, one that forces him to question not only who is to blame but who he can trust amongst his allies, not to mention the corporate representatives and the martian colonists. With a United Nations and Corporations investigation looming over him, and the insidious corporations influencing events, his mission to find those responsible leads him down a dark and disturbing path.

On the corporate-owned spaceship Enceladus, Commander Zarina Verma is tasked with bringing the Chief Investigator for the UNC from Earth to Phobos, while also looking into the Phobos Incident herself. However, her employers, the multifaceted Tao-Kelland-Raman Corporation, do not want the Commander to simply discover if they themselves are to blame; if true, they want her to cover it up. With it taking twenty days to reach Mars, Zarina is not only behind in the race but she is also locked on a collision course with the crew of Domovoi Outpost.

On Mars, colonist and council member Liv Rademaker struggles to deal with the ever-increasing tensions between the Martians and Earth. With her two children and work colleague, Deelon Stafford, to look out for, Liv tries her best to influence the Borealis Colony Council to protect their citizens. But, in the aftermath of the Phobos Incident, it seems that every decision will anger someone, and the councilors find themselves walking a minefield to ensure that their unique place amongst humanity remains intact.

On Earth, the British-Moroccan infiltration expert, Raz Kadir, and his business partner, the Japanese hacker Namazu, finally make it into the big league, having previously only worked in the small-economy. Finding themselves in a steep learning curve, the first official job for their new employer throws them straight into the deep-end against the richest people in the world. With their lives on the line against a formidable opponent, Raz begins learning that Namazu has just as many secrets as their intimidating target.

SOLAR RIFT is a vast saga that takes the reader on a journey through many distinctive characters, locations, and plots throughout the solar system.
Designed to span multiple books, the explosive first entry not only works as a standalone novel but sets up the saga to come, as the four stories continue onwards to greater revelations, twists, and turns.
at April 26, 2020 No comments: